2019 Dawg Dash 5K: Gearing up for Ducks-Huskies with a run with the dawgs 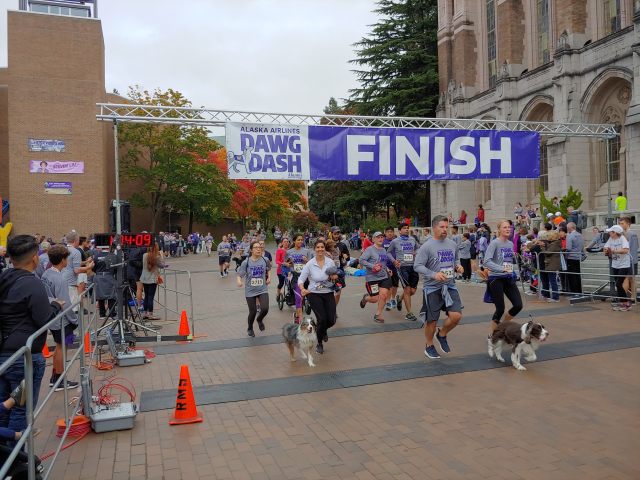 It’s a stressful week for many of us Ducks in the Seattle area. We play the Washington Huskies this Saturday at Husky Stadium with the Pac-12 North title likely on the line. 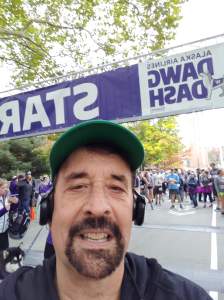 Selfie at the starting line

I began this week by infiltrating enemy territory. I ran the Alaska Airlines Dawg Dash 5K last Sunday (Oct. 13), racing in and around the University of Washington campus with more than 3,000 other runners and walkers. Most were dressed in purple and many were running with their dogs. This is an event I’ve done seven times previously, and it is always spirited and dog-friendly.

I chose this race for my October run (and my 235th road run overall) mainly because it was the most convenient weekend for me — not because I wanted to talk trash with Husky fans (I didn’t). It was a hilly and challenging course, running room was tight in spots, and I recorded my worst 5K time of the year.

However, the UW is a beautiful green, tree-lined campus to run through, and fellow runners were pleasant and accommodating, even if we all got elbowed or bumped on narrow turns. Fortunately, I avoided tripping on any dogs.

The lead Husky gets ready to run

It might have helped that I wore no University of Oregon gear or colors. Instead, I dressed neutrally, wearing my nifty 2019 Hot Chocolate Run fleece top and a Microsoft hat.

However, when I did this run in 2013 in a UO shirt and cap, nobody really gave a damn. On Sunday, I focused just on doing the run and not trying to make a statement. And good thing, because this game may not go the Ducks’ way. I also didn’t display any serious running talent. Yet, it was fun. 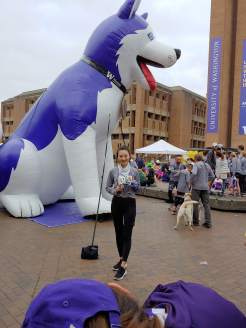 Finisher poses in front of the big dog

When I first ran this race in 2002, much of the course was in and around Husky Stadium to the south. Today, neither the 10K nor the 5K crosses Montlake Boulevard to the stadium side. The 5K covers a circuitous loop around the UW campus north of Montlake (see course map below), and the 10K does the same loop plus an additional jaunt around Ravenna Park further north.

I’ve run the 10K five times (the last time being 2015), and the 5K twice prior to Sunday. I got my best 5K time for this race (26:24) in 2007, prior to my ankle surgeries, and clocked 39:46 in running it again in 2013. Those courses were similar to what I ran on Sunday, except that I remember climbing a set of stairs in the two earlier races and did not have to do that again.

The latest course was again hilly, as I said, with both downhills and inclines. The major downhill came in the first mile in running down 15th Avenue N.E. on the west edge of campus. I tried to push myself hard down this hill because I knew I’d be pretty darn slow running uphill in the later stages of the run. After navigating course twists and turns and narrow passages, and working to sidestep the dogs and strollers passing me, I certainly did labor to make it up those myriad inclines in the last mile.

It felt the course ran longer than a 5K when I finally crossed the finish line in 41:02 (13:14 per mile). Sure enough, my MapMyRun app said I’d run 3.32 miles (not just 3.1). Can I use that as an excuse — that the course was marked incorrectly and we all ran too long? It’d be nice if I could, as I was striving to beat 40 minutes. Full results are here.

As it was, I finished 1,219th out of 2,185 runners and walkers who did the 5K. Another 883 ran the 10K, for an impressive turnout of more than 3,000 participants. The event is for a good cause: raising money for University of Washington scholarships (hopefully, not football scholarships).

Lots of friends and former co-workers I didn’t see

With that many folks doing these races, I figured there would be runners I knew. Sure enough, friends such as Barbara Clements, Jonathan Stutz, and Kate Landry all posted race pictures on Facebook or Instagram (Barbara and Kate with their dogs).

Barbara is a former Bellevue Journal-American colleague who is now media relations manager at UW Medicine. I got to know Jonathan on a project team at Microsoft; he’s now a senior manager at Amazon. UW alum Kate is one of my favorite recruiters and is a client relationship executive at Kforce. 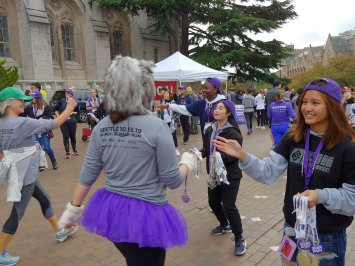 All finishers got medals

Congrats on your run, you guys! Sorry I missed you all.

I must mention a disturbing scene after finishing the run. A runner or spectator was laying flat on stretcher about 20 yards short of the finish line, being tended to by medics and others. It was serious, because a medical vehicle with flashing lights had just pulled up to this person, presumably to take him or her to a hospital. I am hoping this person survived and recovered.

What’s next for me?

The scene at the finsh line, with medics working in the background (click to enlarge)

Not sure about my running plans for the remainder of 2019. I am debating running the Seattle Half-Marathon again this year on Dec. 1, but have a business trip to a Fluke conference in Florida in November and am worried about having enough time to train. I may pick a shorter race. (In fact, I just signed up for the Green Lake Gobble 5K on Nov. 17.)

Posing with the dogs

In December, I usually do the Jingle Bell Run in Seattle or the 12Ks of Christmas in Kirkland.

What I am doing this Saturday? I will be back on the UW campus at Husky Stadium, rooting against the home team. Go Ducks!

I am not an elite runner or bicyclist, though I am friends with many. I run, walk, and bike for fun and the health benefits. I can get you to the finish but probably not to the Boston Marathon (and especially not to the Tour de France).
View all posts by monteenbysk →
This entry was posted in 10K, 12Ks of Christmas, 5K, ankle surgery, Fluke, Hot Chocolate 15K/5K, Jingle Bell Run, Running, Seattle Marathon, Walking and tagged 12Ks of Christmas, 5K, ankle surgery, Dawg Dash, Fluke, Half-Marathons, Running, Seattle Marathon, Walking. Bookmark the permalink.