Posted on January 3, 2017 by monteenbysk

This romp through Lake Washington is the draw for many

Call me whatever you want, but I consider a brisk 5K run in icy cold weather a good way to start a new year. So I’ve run the Resolution Run 5K & Polar Bear Dive 11 times now, including January 1, 2017. 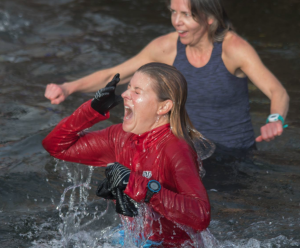 The Polar Bear Dive, where you take a side jaunt into Lake Washington just before crossing the finish line, is a big part of this experience for most. But it is optional. I ran into the lake a year ago — the only time out of 11 that I’ve taken the plunge — but decided to stay dry this year. Staying dry means going right to the finish line without that short venture into the lake and back. You declare when you register: wet or dry.

My experience last year was fun, yet underwhelming. What was more memorable was feeling before the race that I might be coming down with a cold, and stressing out over whether to even show up, let alone get wet. I felt rundown as I debated whether to race, but a sudden burst of energy before breakfast convinced me to go meet friends and do the run into the lake. It all worked out. 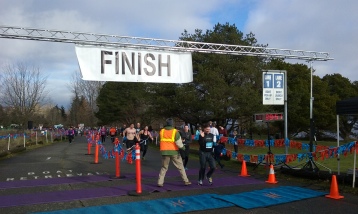 Wet runners get to the finish line

Rather than worry about a possible repeat of that situation this year, I signed up for the dry run a couple of weeks ago. No regrets. I got a chance to do the run and take lots of pictures, without worrying about getting sick, or my smartphone getting wet. I also didn’t have to change clothes right after the race.

OK, this is lame. I’m a wuss. But give me credit for getting up and running on a day (temps in the 30s) when most people prefer to stay in bed.

Why I keep doing this run

The Norreds — Sally, Chris and Oliver — and friend J.R. after changing clothes

I enjoy this run because about 1,000 people are there — the vast majority because they really want to be. It’s a mix of fitness freaks and wannabes.

While the jump into the lake is the draw for many, there are similar Polar Bear Dives around the Seattle area on Jan. 1 where you don’t have to run a 5K first — you can just run into the water. So most who come to Magnuson Park for this event do so for the exercise too.

Friends Sally and Chris Norred have done this race together for several years. They always run into the lake. It was great to see them again, with their son Oliver and his friend J.R., at the post-race chili feed. They all finished ahead of me, even if they slogged through the water and I didn’t. Sally and Oliver both came in third in their age groups, and in the Top 20 for women and men, respectively.

Microsoft friend Jen Gaudette is another regular who always goes into the water. Too bad I didn’t see on Sunday. Interestingly enough, she finished fourth in her age group, right behind Sally. Sorry, I missed you, Jen!

Meanwhile, former Allytics teammate Jamin King does the dry 5K, to win it — as he did in 2016. Jamin on Sunday finished second overall in 16:21 (5:17 per mile), 26 seconds behind winner Mark Mandi. Awesome run, Jamin! Nice to chat with him and meet his mom after the run.

Feeling the cold at the starting line

Slower time for me, but I finished strong

The best outfit of the race

My best time for this event is 24:59 (8:02 per mile) in pre-injury 2007, on a different Magnuson Park course. (My 5K PR is 24:32 in 2005.) In 2009, they moved the starting line and finish line to the southeast side of the park (from the northwest side), and it’s been the same course for eight years. The course is essentially a full loop that includes a hairpin turn at the two-mile mark. It’s mostly flat but has a couple of small inclines just before the hairpin turn.

I have no complaints about this course. But the icy spots and half-water, half-ice puddles throughout can make it difficult to navigate. I was glad to not trip over any runners dodging the icy spots and to avoid being cut off by dogs or strollers. What I like about the course: The last 0.7-mile is a mostly straight stretch to the finish, where you can go all out (unless you go into the water).

Another shot from the lake

What’s next: running and bicycling 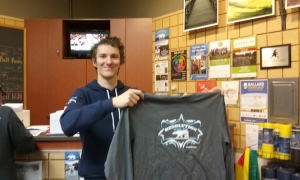 Other January races are few and far between, so I probably won’t race again until the Valentine’s Day Dash 5K at Green Lake on February 12. As I said before, I’m looking forward to the start of bicycling season, which begins for me with the Chilly Hilly ride on Bainbridge Island on February 26.

One road run I’m planning to do for the first time: The Hot Chocolate 15K in Seattle on March 5, a week after the Chilly Hilly (I ran the 5K last year). So I have a bit of cold weather training ahead for both running and bicycling. Looking forward to it!

Thanks for reading, and Happy 2017 to everyone! Till next time.

I am not an elite runner or bicyclist, though I am friends with many. I run, walk, and bike for fun and the health benefits. I can get you to the finish but probably not to the Boston Marathon (and especially not to the Tour de France).
View all posts by monteenbysk →
This entry was posted in 5K, Chilly Hilly, Resolution Run 5K, Running, Valentine's Day Dash and tagged 5K, Allytics, Bainbridge Island, Bicycling, Chilly Hilly, Green Lake, Lake Washington, Magnuson Park, Polar Bear Dive, Resolution Run 5K, Running, Valentine's Day Dash. Bookmark the permalink.