2016 Mustache Dache 5K: A hairy race before an even hairier election

My best picture of the day. Thanks to these runners for posing

Last Sunday’s Mustache Dache 5K — “Seattle’s hairiest race” and part of a national road-race series to support men’s health — started the week off right. The Seahawks’ game against Buffalo on Monday Night Football followed and was agonizing, but it was a win.

The family that runs together …

Then the whole week was trumped by Tuesday’s depressing presidential election. I spent several hours Tuesday and Wednesday in a state of shock. I am still recovering as I write this, and am not incredibly inspired to make this blog great again. (Which means my usual boring post.)

But the protests over the election will die down, people will move on, and I too must try not to think the world is rigged. And I will continue to run, on a gimpy left ankle, because it eases tension and generally changes my mood. This type of stress reduction, I need. Maybe more so now than ever.

Lots of mustaches but fewer runners 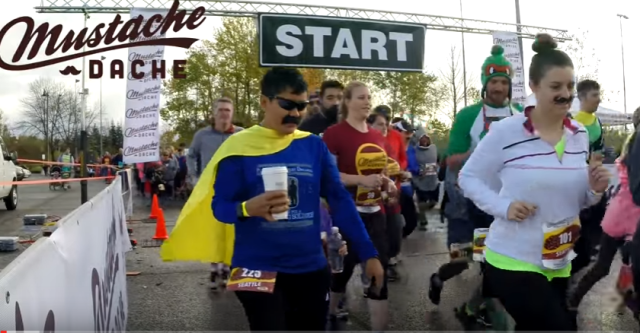 Runners cross the starting line; from the race video

Now, about the Mustache Dache. It was held at Seattle’s Magnuson Park, in cloudy but dry weather after a night-long downpour. The flat, loop course through the park had, as a result, wet leaves and puddles everywhere, along with bumps and cracks in the asphalt surface that made it all messy and slick. However, I stayed upright.

Microsoft friends Jonathan Stutz, left, and Jen Gaudette with me at the starting line

However, even with the smaller field of runners, the vibe was upbeat and festive. There was a mechanical bull and beer garden, though no live band this year. And a costume contest — many runners wore costumes, and many women (and men, and children) pasted on fake mustaches. After all, this is Movember, a month for appreciating the male side of the population.

At mid-race, a women I was running behind stopped to ask a female friend, “Is my mustache still on right?” It certainly was; I looked to make sure, too.

Nice to run with teammates and friends

Also, I ran the race with two teammates from Allytics, where I work, which was fun. Great to have R.J. Ricker and Kiersten Walker waiting for me at the finish line. Thanks, you two (and you, as well, James Taylor)! I also saw two Microsoft friends at the starting line, Jen Gaudette and Jonathan Stutz. But I somehow missed out on seeing another former co-worker at Zones. Sorry, Tyra Nelson (who ran with daughter Taryn)! 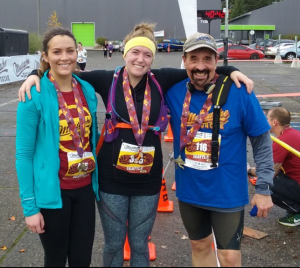 Allytics friends Kiersten Walker and R.J. Ricker with me at the finish line

Congrats all to them for their great races, especially Jonathan for finishing in the top 20 and Jen for third in her age group.

It was my 14th race of this year and 203rd overall. You can see the start and finish of the race by watching this YouTube video. (And I noticed that I do run with a pronounced limp.)

The costume contest after the race. How could you run in these outfits?

Here are some tips to pass on for this event: 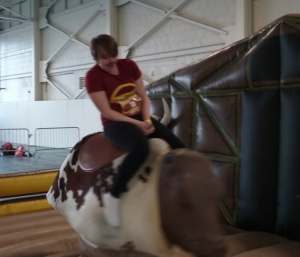 Someone is about to be bucked from the mechanical bull

This is it for November/Movember. I’ll be on vacation in another week or so and will miss the Seattle Marathon and Half-Marathon for the first time since just after my surgery in 2011.

Potential December races to run: The Ugly Sweater Run 5K at Marymoor Park on Dec. 3; the Jingle Bell Run 5K in downtown Seattle Dec. 11, and the 12Ks of Christmas 12K/5K in Kirkland Dec. 18. On New Year’s Day, I will be back here at Magnuson Park for the Resolution Run 5K & Polar Bear Dive, which I will likely wade through the cold Lake Washington water again.

Thanks for reading. Till next month.

I am not an elite runner or bicyclist, though I am friends with many. I run, walk, and bike for fun and the health benefits. I can get you to the finish but probably not to the Boston Marathon (and especially not to the Tour de France).
View all posts by monteenbysk →
This entry was posted in 10K, 12Ks of Christmas, 5K, Marathons, Marymoor Park, Mustache Dache, Resolution Run 5K, Running, Seattle Marathon and tagged 12Ks of Christmas, 5K, ankle surgery, Half-Marathons, left ankle, Magnuson Park, Marathons, Resolution Run 5K, Running, Seattle Marathon. Bookmark the permalink.

1 Response to 2016 Mustache Dache 5K: A hairy race before an even hairier election