The 12th annual 12Ks of Christmas run in Kirkland last Sunday (Dec. 21) featured new 12K and 5K courses this year, and I ended up getting lost in the last two kilometers of the 12K. In fact, I apparently took a different route for the last mile or so than the 1,367 other runners and walkers who finished.

But I did not get disqualified, and no one seemed to care or even notice (maybe one runner noticed). And it is hard to say if I ran more than a 12K, less than a 12K, or about the same as others who were not likewise confused by the final leg of the course. Most likely, about the same.

For the first time in the race’s existence, the start and finish lines were at Heritage Park, on Waverly Way just north of downtown Kirkland, instead of at nearby Marina Park in the downtown. I have done this race every year it’s been held, beginning in 2003 (the 2008 race was canceled on race day due to icy roads and unsafe conditions). So I was used to the old course.

There were several course tweaks this year, but this was the big one for me: Previously, you’d start at Marina Park and run up Market Street for a loop in front of Heritage Park on Waverly Way for the first 1.5 miles of the race. That loop — or a now-elongated version of it — is now the end of the race. So now you pass through Marina Park at the 10K mark, and need to eek out another 2K up and around Heritage Park.

Once up Market Street, it was clear that the course did NOT turn left onto Waverly Way for the finish (as the old course did at the start). The course had to turn left somewhere to return to Heritage Park. That apparently was further north on 7th Avenue. But I turned left a bit earlier than 7th, at 5th Avenue. Why? Not exactly sure, but I followed three women who I thought were walking to the finish line. Also, there were just lots of race finishers and others milling around in the area, so things were ambiguous, and I’d lost sight of other runners who had been immediately ahead of me. 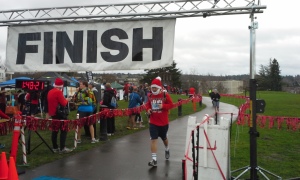 To my chagrin, the three women ahead of me ended up walking just to their car that was parked on 5th. Not a good sign. So I kept on running westward, with no race officials and no runners or race course in sight.

I ran west about a half-mile to an intersection where I could see down the hill to Waverly, and where I could see that the course picked up again. So I turned left and ran down a block to it, but it was clear from the orange cones that I needed to run further west to truly get back on the course. So I did, and ran back up a hill, just as other runners were correctly going in the opposite direction. They included a woman, previously right behind me, who looked at me strangely like I was RIB (running in bewilderment). I was. 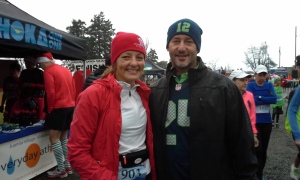 But finally, when I turned back around at the top of the hill, I was back on course, going the right way, with another 1K to go.

The woman who gave me a strange look had a nice tush, so I didn’t mind following behind her. But I was glad to get the finish line, and a bit embarrassed about misjudging the course. Oh well, if no one else cared, I guess I won’t. But if there is a new course again next year, I will study it better in advance.

Why did they change the course for 2014? I’m not sure. I’m not aware of any reason due to road construction in Kirkland.

But race organizers promoted the new course as “much flatter” than the previous one. Honestly, I didn’t notice it being much flatter at all. The hills later in the race offset those in the stretch up 108th Avenue N.E. that was eliminated from the middle of the race.

In 2015, the course will change again. At the starting line, the race emcee promised that the 2015 course would be “even flatter” because it will incorporate the new Eastside Rail Corridor through Kirkland, which is about to become newly paved. Running on the new rail-trail sounds great. I just hope the route back to Heritage Park is better marked.

Oh yes, my time. I finished in 1:4o:40, which is 13:31 per mile. Full results are here. That beat my last year’s time of 1:42:41 (13:47 per mile), which was my main goal. Had I followed the correct course, I believe I would have done better than 1:40:40, because I wouldn’t have been RIB and looking around wondering where everybody went. But no worries. My life needed some drama.

Here are some other notes:

Hope everyone had a great Christmas. Happy New Year to you all!

I am not an elite runner or bicyclist, though I am friends with many. I run, walk, and bike for fun and the health benefits. I can get you to the finish but probably not to the Boston Marathon (and especially not to the Tour de France).
View all posts by monteenbysk →
This entry was posted in 12Ks of Christmas, 5K, Resolution Run 5K, RSVP, Running and tagged 12k race, 12Ks of Christmas, 5K, Eastside Rail Corridor, Heritage Park, Marina Park, Running, Walking. Bookmark the permalink.