I don’t handle colds well. When I should be home nursing them and getting better, I go out do and something like a hilly, challenging, 33-mile bicycle ride in the cold and pouring rain. That ends up prolonging the cold.

The 2014 Chilly Hilly on Bainbridge Island was not a great way to get over a cold. Not with the weather last Sunday, Feb. 23. I’d heard earlier in the week that the forecast was for dry weather. Closer to Sunday, I started hearing about snow, and didn’t believe it. Well, it didn’t snow, but it did rain hard and steady throughout the ride, and I was a cold, sopping wet mess when I crossed the finish line.

After a hot shower and dry clothes, I felt better, and satisfied with the accomplishment. I had done a tough ride with very little training (one training ride in 2014), and finished in 3:34, faster than both of my previous Chilly Hilly times. Now, to get over this cold.

Here’s a little bit about the ride. The day started with me having to park too far away from downtown Seattle’s Colman Dock ferry terminal, and getting to the 9:35 a.m. ferry a minute late. It departed without me and a few other late-to-the-gate bicyclists. The last ferry available for the ride was to leave at 10:35, so we waited for an hour.

The weather was chilly (temperatures in the 30s and 40s) and it started sprinkling, as about 50-60 bicyclists waited for the last ferry. All told, about 2,900 people did the ride; some started on the Bainbridge Island side, but the largest throngs took three earlier ferries out of Seattle. The 2,900 estimate is a drop from previous years; a record 6,029 did the ride in 2010, according to The Seattle Times.

Once the ferry got docked on Bainbridge, after a half-hour crossing Puget Sound, the bicycle ride started. As we rode away from the ferry, we saw the first group of finishers (the course opened around 7 a.m.) waiting to get on the ferry back to Seattle.

A short time after my ride began, it started pouring. Then it was pounding. My multiple layers, my double-socked feet and shoes, my double-gloved hands all got soaking wet. The cold winds from the water made it worse. I shivered and dealt with it. 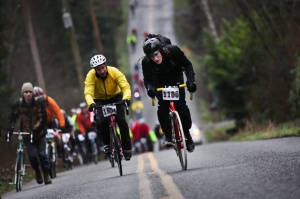 This course is essentially a loop around the island, with twists and turns, steep hills up and down, and some incredible views of the water, the Olympic Mountains and Seattle to the east. Because I was in the last group of riders, most of the photographers and some of the volunteers had departed. There were smaller clusters of riders at this time of day at hills and the two food stops.

About five miles into my ride, I realized: Hey, I haven’t trained very much for this ride! I’d actually ridden only once outside (a 25-mile training ride) since last year. But I’d done lots of running, walking, elliptical and stationary bike workouts, so I’m not out of shape. I just was not overly prepared for tough hills, and a bit cautious going down hills.

There five major hills (to me) to climb in this ride, and I ended up walking my bike up parts of three of them (small parts, actually). Despite this, I think I did pretty well for the race. My overall pace was faster than my two previous Chilly Hillys, and I felt strong riding up the last, steep hill to the finish line. Besides that, I’d avoided any crashes, spills or flat tires in the rain. It was a happy ferry ride back, in part because my clothes started drying out.

I enjoyed riding some with a dude I met waiting for the ferry to Bainbridge, a guy who said he recently moved to Seattle from Los Angeles to work for the Seattle School District. It was his first long ride in Puget Sound weather. We hooked up again on the ferry back. He, too, was soaked and said the hills were not was he was used to. But he had fun.

Congrats to him — I never did get his name — and to my neighbor, Geoff Hazel, a veteran rider who I also saw on the ferry back. I missed any other friends who may have ridden this event last Sunday.

I am back to running for much of March. I’m planning to do the St. Patrick’s Day Dash in Seattle and the Mercer Island Half-Marathon (walk/run) on back-to-back weeks. I better get back to training! I do need to ride my bike some more, too, however; I’m planning to do the Flying Wheels Century ride on May 31.

Thanks for reading! Till next time.

I am not an elite runner or bicyclist, though I am friends with many. I run, walk, and bike for fun and the health benefits. I can get you to the finish but probably not to the Boston Marathon (and especially not to the Tour de France).
View all posts by monteenbysk →
This entry was posted in Bicycling, Century, Chilly Hilly, Flying Wheels, Mercer Island Half-Marathon, Running, St. Patrick's Day Dash and tagged Bicycling, Chilly Hilly, Flying Wheels, Half-Marathons, Mercer Island Half-Marathon, Running, St. Patrick's Day Dash, stationary bike, Walking. Bookmark the permalink.