Posted on January 6, 2014 by monteenbysk

I enjoy starting off each new year with the Resolution Run 5K, a race I’ve done for eight of the last 10 years. Call me chicken though, because this event at Seattle’s Magnuson Park includes an optional Polar Bear Dive into Lake Washington, and I’ve never taken the plunge. I always cross the finish line in (relatively) dry clothes.

One of these days I will brave the ice-cold temperatures and belly flop into the shallow waters located about 25 yards from the finishing area. But not in 2014.

I will remember the 2014 run, however, because some how, some way, I beat my previous post-surgery best 5K time by more than two minutes. I am running better these days, but credit should go to this being a mostly flat course with a long, (mostly) straight last mile to the finish line. It also helped that I parked nearly two miles away — almost a mistake — and that the walk/run to the starting line warmed up my ankle.

This was my fastest 5K time since running 32:24 (10:27 per mile) on a gimpy ankle in the Resolution Run three years ago. Later that summer of 2011, I had ankle surgery to clean up a deteriorating mess, and I thought I might never run again. I am back running, obviously, but I do not have full flexibility in my left ankle and I run carefully. I watch where I step and I certainly don’t pound my left foot.

But, hey, I’m happy to be running!

More than 1,800 runners and walkers completed the 2014 Resolution Run, roughly 60 percent of them women. I enjoy this event because, while not everyone is eager to get up and do a road run on the morning of New Year’s Day, those that are there are in good spirits, interested in fitness and ready to give a good effort. Plus, there is a delicious bowl of chili for all finishers and a beer garden for people over 21.

A big thanks to fellow former journalist and Microsoft friend Chris Norred for running with me for a mile in the middle of the race, and actually pacing me. That helped me, though it slowed him. Congrats to Chris and wife Sally Norred for their races (both took the plunge) and to another Microsoft friend, Jen Gaudette, on another fine run (she also dived into the water). 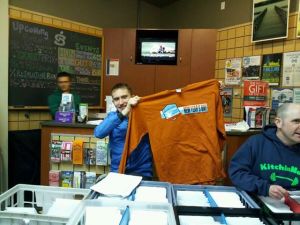 What’s next? I don’t plan to run again until the Love ’em or Leave ’em Valentine’s Day Dash 5K on Feb. 8 at Seattle’s Green Lake Park. I will be getting back into bicycling, but I don’t plan to do the Stinky Spoke this month due to the narrow, icy course (call me chicken, again). My first ride of 2014 will be the Chilly Hilly on Bainbridge Island Feb. 23.

I am not an elite runner or bicyclist, though I am friends with many. I run, walk, and bike for fun and the health benefits. I can get you to the finish but probably not to the Boston Marathon (and especially not to the Tour de France).
View all posts by monteenbysk →
This entry was posted in 5K, Bicycling, Chilly Hilly, Resolution Run 5K, Running, Stinky Spoke, Valentine's Day Dash and tagged 5K, ankle surgery, Bicycling, Chilly Hilly, Green Lake, left ankle, Magnuson Park, Running, Stinky Spoke, Valentine's Day Dash. Bookmark the permalink.