2013 Valentine’s Day Dash: Got beat by a running Hershey’s chocolate

It’s true. As I was hustling in my limp/run-gingerly style through the last mile of Saturday’s Valentine’s Day Dash 5K at Green Lake Park in Seattle, I passed a runner dressed as a huge, silver wrapped Hershey’s chocolate going the other way. He (or she) had already finished the race and was walking back to his car (or gift box).

This race is always festive, and there were runners wearing tutus, pajamas, and sportcoats and ties (and more clothes than Seattle’s 2013 Cupid Undie Run, held the same day). Most everyone was in red; race organizers suggested that participants don their free bright “Love The Run” race shirt (see picture) for the event. 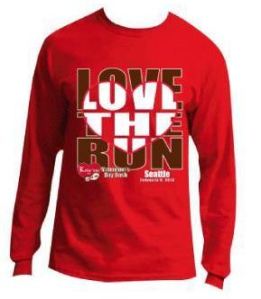 But the Hershey’s chocolate won my vote as best costume of the day. It was an incredibly heavy, bulky and unbearably hot outfit to wear, and probably forced other participants to move to the side as this bell-shaped runner plowed through the narrow Tunnel of Love to the finish line.

I continue to enjoy running these races — until I see the race clock at the finish line. I’d thought for sure that I had run (jogged) harder and improved my post-ankle surgery 5K time. But, no. My chip time was 32 seconds slower than it was for the Resolution Run 5K on Jan. 1, my first complete 5K run (versus walk/run or complete walk) since my surgery in August 2011. My time was 42:35, a pathetic pace of 13:44 per mile.

Yes, running with a limp is slow-going. Here are race results. 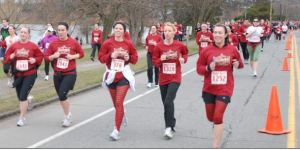 At any rate, I am on to bicycling now, training on my new Trek 1.1. road bike to get ready for the Chilly Hilly on Bainbridge Island on Feb. 24. There are three runs I’d like to do in March, including the Mercer Island Half Marathon (probably a walk/run). But it’s mostly bicycling until then.

I am not an elite runner or bicyclist, though I am friends with many. I run, walk, and bike for fun and the health benefits. I can get you to the finish but probably not to the Boston Marathon (and especially not to the Tour de France).
View all posts by monteenbysk →
This entry was posted in 5K, Bicycling, Chilly Hilly, Mercer Island Half-Marathon, Resolution Run 5K, Running, Valentine's Day Dash and tagged 5K, ankle surgery, Bicycling, Chilly Hilly, Green Lake, Half-Marathons, Mercer Island Half-Marathon, Running, Valentine's Day Dash. Bookmark the permalink.

5 Responses to 2013 Valentine’s Day Dash: Got beat by a running Hershey’s chocolate